Democrat Sen. Kyrsten Sinema And The ‘Secret Weapon’ She Uses On GOP Men 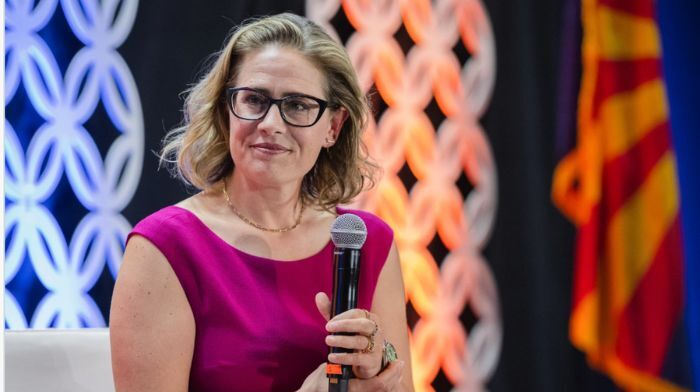 
“This Will Not Pass,” the new book written by two New York Times reporters Jonathan Martin and Alexander Burns, has spilled the beans on quite a few Democrats.

Jill Biden telling then-candidate Kamala Harris to “go f**k yourself,” and the rocky relationship between President Joe Biden and now Vice President Kamala Harris was among the revelations.

Now, the duo is telling on another Democrat, Senator Kyrsten Sinema of Arizona. Apparently, the good Senator has, well, a strategy for getting Republican men to see things her way.

every single straight dude on this website watched kyrsten sinema get harassed by a lefty lunatic on an airplane on repeat to look at her cleavage. don’t lie. we know.

According to excerpts from the book, Sinema “boasted knowingly to colleagues and aides that her cleavage had an extraordinary persuasive effect on the uptight men of the GOP.”

The book also said that Sinema claimed it was “easy” to “charm” Republican men. The book claims that Sinema was making the comments in a joking manner. But if so, that brings up a confusing dilemma.

While Sinema might not be as far left as say, AOC, it is usually liberal women who can spot the slightest whiff of sexism in our ‘patriarchal’ society.

A few valid questions could be asked: by Sinema bragging how easy Republican men can be persuaded by cleavage, isn’t it a bit sexist herself to say that men are easily distracted by a woman in that manner? Also, is it sexist of men to stare at Sinema’s cleavage when she doesn’t want them to, and not sexist when she does in order to get some legislative business done?

Perhaps when the book comes out, we will get some of the anecdotes from Sinema about who was mesmerized by her cleavage, and what she used her secret weapon to accomplish.

Ladies and Gents (wait can you still say that?) I give you the name of my new Butthole Surfers cover band…. Kyrsten Sinema’s Cleavage. https://t.co/bMwk5djnnY

Not Always A Friend To Her Own Party

Kyrsten Sinema, like former Arizona Senator John McCain, is a bit of a “maverick” in her party.

Last Fall, radical leftists even followed her into a restroom over her opposition to the bill, incredibly, up to the point where she went in a stall.

The new book claims that because of positions she has taken such as these, top presidential aides view her as “difficult.” The book also tells of the Biden White House being “offended” at Sinema’s request in 2021 that Biden not visit Arizona to tout the passage of the American Rescue Plan, even though she voted for the bill.

At the time, the book says, Biden aides were “puzzled” by Sinema’s request considering Biden had carried the state and was fairly popular.

However, fast forward to 2021, where, according to a Morning Consult poll, Biden is 14 points underwater and job approval at 41%. Sinema’s approval is slightly ahead of Biden in approval at 43% of Democrats but, incredibly, 55% of Republicans.

Not Your Dad’s Democrat Senator

Kyrsten Sinema can usually turn a head or two in the hallways of the Senate with or without cleavage. Her quirky fashion sense make her a stand out, and seen as not joining the female politician pant suit brigade popular on both sides of the aisle.

Burns and Alexander’s book describes Joe Biden as being “perplexed” by her, and that it could be because of generational differences between the two. They write in the book:

“One person close to the president likened Biden’s perplexity at Sinema to his difficulty grasping his grandchildren’s use of the viral-video app TikTok. He wanted to relate, but he just didn’t quite get it.”

For Kyrsten Sinema, perplexity might just be a back up weapon she should hang onto.

“This Will Not Pass” is scheduled for release in early May.

Kyrsten Sinema knows the power of boobs and cleavage… https://t.co/Oa2SGmy4wC via @CitizenFreePres
LOOKS GREAT TO ME!

Biden judicial nominee on board of prison 'abolitionist' group

After the Highland Park attack, Senate hearing on ‘Protecting Our Communities from Mass Shootings’

‘The grip’ of 1918 better known as the Spanish flu

‘Social engineering of our kids’ topic of panel discussion in Bloomington