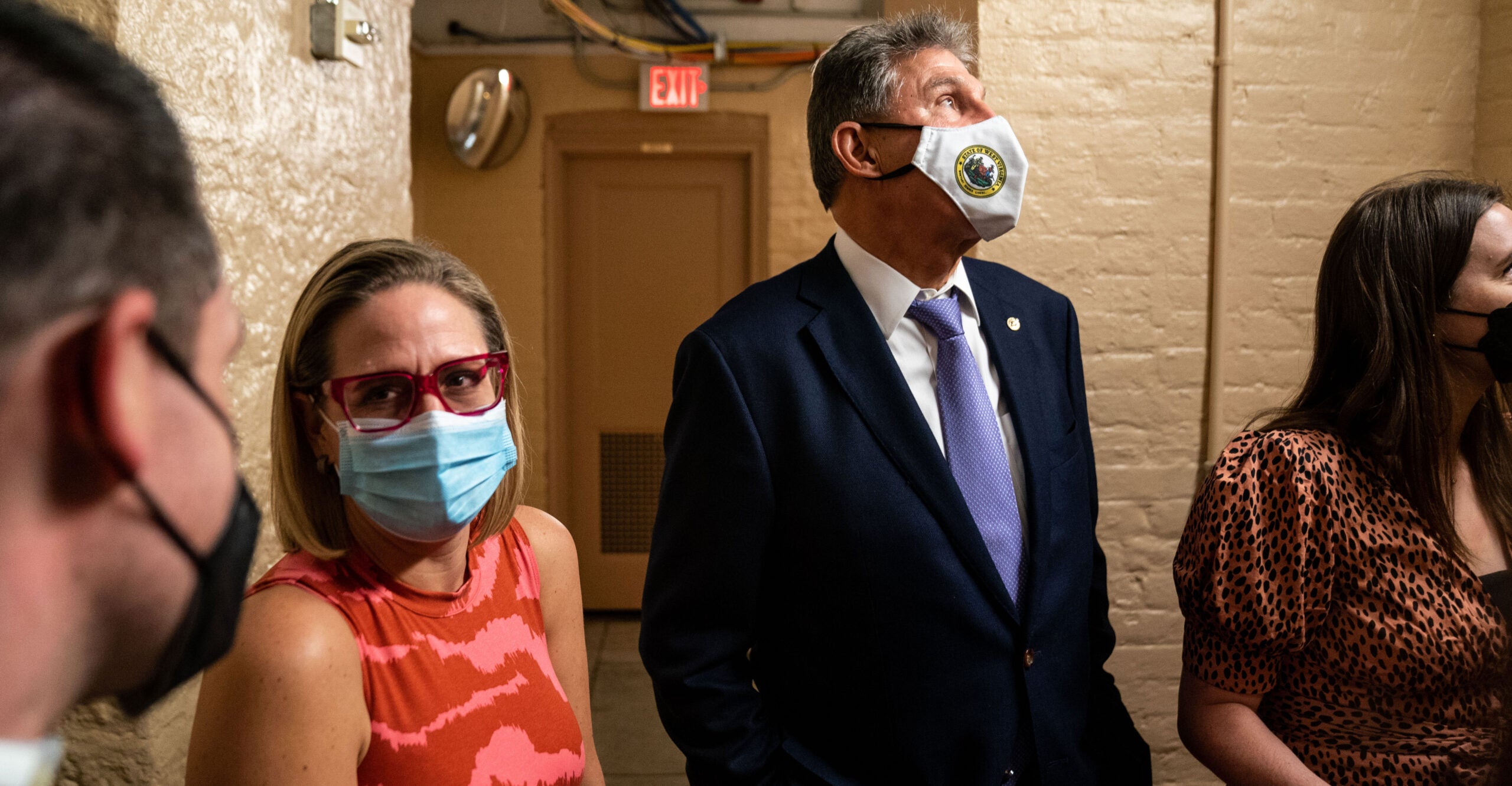 
There’s apparently no political courage worthy of commendation ever exhibited by maverick Democrats—at least not if the John F. Kennedy Library Foundation’s annual Profiles in Courage Awards are the arbiters thereof.

The foundation’s website explains what it claims it’s looking to reward and showcase with its yearly awards: “In times of partisan divide and political gridlock, uplifting stories of political courage from across the country is how we can inspire leaders to work together for the common good.”

This is nothing if not a time of “partisan divide and political gridlock.” So, on Feb. 15, the deadline for submitting nominations for this year’s awards, I wrote that there were “two nominees who, by any objective measure, should be the hands-down winners of the 2022 honors.”

I nominated Democratic Sens. Joe Manchin of West Virginia and Kyrsten Sinema of Arizona, who exhibited steadfast political courage in standing up to their party’s leaders back in January.

In the face of ad hominem attacks from within their party, they refused to go along with the other 46 Senate Democrats (and the two in-name-only “independents” who reflexively vote the party line) in their hyperpartisan bid to abolish the Senate filibuster. (That would be the same filibuster, incidentally, that Senate Democrats weaponized against GOP legislation and Republican President Donald Trump’s nominees 327 times in 2020 alone.)

“The ability to debate and do the hard work to find consensus between [the] two parties [are] more important for our country now than ever before with the Senate evenly divided,” Manchin said in a Jan. 22 statement reaffirming his support for preserving the Senate filibuster.

That same day, the Democratic Party of Arizona voted to censure Sinema, who had expressed similar sentiments nine days earlier on the Senate floor.

By joining all 50 Republican senators in the evenly divided Senate to preserve the filibuster, Manchin and Sinema effectively prevented Democrats from being able to change Senate rules and ram through several bills that would have been great for Democratic partisans, but horrifically bad for the country, including shamelessly partisan election “reforms” whose true purpose was to all but cement permanent Democratic control of Congress and the White House, along with President Joe Biden’s $5 trillion Build Back Better boondoggle.

Recipients of the 2022 Profiles in Courage Awards were announced April 21. Regrettably, Manchin and Sinema were not among them.

Instead, the award winners included Rep. Liz Cheney, R-Wyo., hailed for her unrelenting criticism of Trump, for voting to impeach him, and for providing GOP cover to the Democrat-packed Jan. 6 committee, which gives kangaroo courts a bad name.

Curiously, the foundation didn’t also bestow an award upon Cheney’s fellow GOP enabler on the stacked-deck committee, Rep. Adam Kinzinger of Illinois. For all his well-publicized crocodile tears, Kinzinger now actually has something to cry about.

Also to be feted at the awards ceremony on May 22 in Boston is Michigan’s Democratic secretary of state, Jocelyn Benson, cited for standing up to “protestors … demanding that Michigan’s [2020] presidential election result be reversed.” (As if a Democrat was ever going to do that.)

More plausibly, Arizona House Speaker Russell Bowers, a pro-Trump Republican, was chosen for resisting GOP pressure “to go along with an illegal scheme to replace Arizona’s legal slate of electors with a false slate of electors who would elect Trump.”

Perhaps as a fig leaf to divert attention from the deeply pro-liberal slant of the awards, the foundation chose as its top recipient Ukrainian President Volodymyr Zelenskyy. While Zelenskyy is indeed a profile in courage for standing up to the Russian invasion of his country, it’s at least worth noting that the invasion didn’t occur until Feb. 24, nine days after the deadline for nominations.

The clear political slant of this year’s awards isn’t an anomaly, however.

Previous winners include House Speaker Nancy Pelosi (2019), former President Barack Obama (2017), and then-Sen. Ted Kennedy (2009), three deeply partisan liberal Democrats, none of whom will ever be accused of “work[ing] together for the common good” in times of “partisan divide and political gridlock.”

Past Republican recipients include Sen. Mitt Romney of Utah (2021) for voting to impeach Trump and former President George H.W. Bush (2014) for reading his own lips and breaking his pledge not to raise taxes.

Obviously, the Profiles in Courage Awards are the JFK Library Foundation’s prizes to hand out as it sees fit, but the foundation’s board does no favors for the awards’ credibility by invariably choosing actors and actions favoring liberal outcomes—particularly those in which the “courage” to cross the political divide always occurs in one direction.

This column first appeared at The Washington Times.

Have an opinion about this article? To sound off, please email letters@DailySignal.com and we’ll consider publishing your edited remarks in our regular “We Hear You” feature. Remember to include the url or headline of the article plus your name and town and/or state.

Gabby Giffords fundraises in Chicago in wake of Buffalo and Uvalde shootings: ‘A better world is possible’

Voters Have Expanded Medicaid in 6 States. Is South Dakota Next?

Covid can rebound even in people who haven’t taken Paxlovid: Study

Buffalo vs. Waukesha: To Biden, Some Mass Killings Worse Than Others

Democrats and Republicans Agree That Democracy Is in Danger