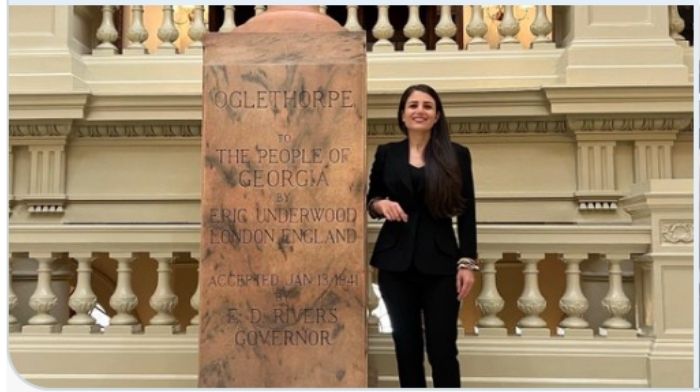 
The left loves to tell us that the American dream is dead. But nearly every day we hear stories that disprove that fanciful notion.

The story of Marziyeh Amirizadeh is living proof. And she can give a very credible word of warning as to where she sees America headed.

Born in Iran into a society where women and girls are second class citizens, life has brought Marziyeh to the United States, where she has become an American citizen, and now she is running as a Republican for State Representative in Georgia’s 67th district.

I sat down with her this week so I could tell the tale.

Yesterday, I officially qualified as a candidate for the State House, District 67. It will be truly an honor for me to serve people at my community. I appreciate all your support and prayers for me. pic.twitter.com/V6um1y1L1H

A World Away From Georgia

Born in 1979 just months before the Iranian Islamic revolution, Marziyeh grew up in a family that was fairly well-off in the repressive Islamic regime of the Ayatollah Khomeini. Her father was supportive in her endeavors but her brothers mocked her idea that that she could do anything she set her mind to.

As an adult, Marziyeh did something that in Muslim countries is often punishable by death. Marziyeh became a Christian. It was a choice that would change the course of her life.

In 2009, Marziyeh and her friend, Maryam Rostampur, were in the streets of Tehran, preaching the gospel and handing out Bibles to Iranian citizens. They were both promptly arrested after being under surveillance by the government for several months.

Marziyeh and Maryam were sent to one of Iran’s most notorious prisons, Evin prison, where they were both sentenced to death. They spent almost a year in prison until word of their plight became known to human rights groups. They were released on November 18, 2009.

I am very grateful for being endorsed by @V4AFI. This is a huge honor to be endorsed by such a great group of patriots who faithfully serve our country. May God bless VFAF for their hard work and standing up for the founding principles of our country. https://t.co/SMb4kklpHq pic.twitter.com/7tsxDdMTTV

Marziyeh came to the United States, a childhood wish, as a refugee. Once in America, she and Maryam wrote the best selling book about their nightmare in the walls of Evin prison called “Captive in Iran.”

Marziyeh has spent her time traveling the United States speaking about her experiences and promoting the book. But now, she is embarking on a new adventure, American politics.

The district Marziyeh is running in is in Fulton County, just south of Atlanta. It is predominantly African-American. Marziyeh has no GOP primary opponent but she says that, “God led me here.”

Her country that is now thankfully these United States of America.

She says, “I want to talk to the people in my district and find out what they want me to do as their Representative.” She says that one of the issues in her district is school choice, and children being indoctrinated. Redistricting, taxes, and regulations are other topics on the minds of voters in the 67th district. She says, “I want Georgia to be a fertile ground for new business.”

Marziyeh said that, “becoming an American citizen was the greatest day of my life.” But she can also see dangerous things happening in America. “Since I lived under an authoritarian regime for 30 years, I know some of the tricks of how the government can take away our freedoms, like creating division among people. I see many politicians use this for their own benefit.”

Marziyeh talked about the 2020 presidential election. “It set off alarms with me and I thought what is going on? It reminded me of the system in Iran.” When asked what was important to the people in her district she said, “Election integrity. It is important to people in my district and in America. People want to have transparency.”

Marziyeh is also very pro-Second Amendment. “People don’t have power in Iran, the government has all the power.” She also touched on censorship, “If you have the wrong opinion in this country, you can lose your job, get banned from social media and even be threatened with violence. These are alarms to me, we are losing our freedoms.”

Marziyeh is no fan of Joe Biden’s deal with Iran. “It’s the most horrible thing ever. We should never negotiate with terrorists.” Marziyeh also has a second book out called, “A Love Journey with God.”

Marziyeh said, “God has led me down this path. For me, this is not an election, it’s a mission. Leaders are not supposed to rule people, they are supposed to listen to the people.”

Her favorite quote is one from President Ronald Reagan: “Freedom is never more than one generation away from extinction.”

It was a great honor to meet Ambassador Nikki Haley and Herschel Walker. pic.twitter.com/lYwRDmyEH9

Editor’s note: The Political Insider does not endorse political candidates for any office.

Biden’s Misplaced Emphasis on One Gun

Migrants still being turned away despite lining up for hours

Man who shot at car with kids inside gets 4 months

Marking 9/11, Biden Remembers the ‘Precious Lives Stolen From Us’

The Scene at the Border