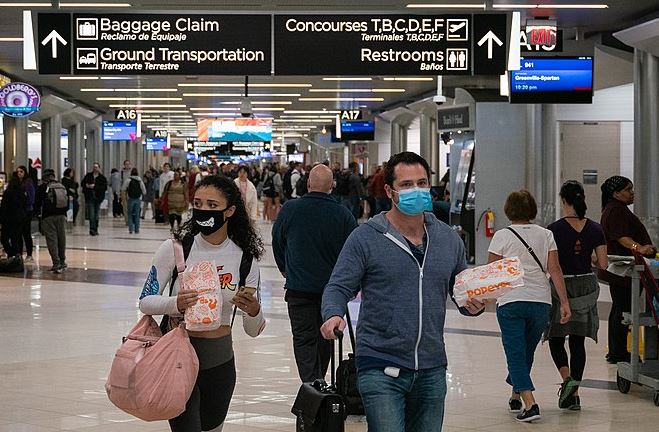 
By Philip Wegmann for RealClearPolitics

On the question of whether the federal government ought to require airplane passengers to wear a face mask, the White House is flying blind. Then again, so is everyone else.

“Public polling does not actually show that there is a universal view of people getting rid of masks,” White House Press Secretary Jen Psaki told reporters as videos of jubilant passengers and flight attendants tossing their face coverings flooded the Internet. “That is not,” Psaki added, “actually what public polling shows.”

White House officials would not say what polls they were reading when RealClearPolitics asked, while reiterating the caveat that the administration makes public health policy based on public health, not public opinion surveys. White House Chief of Staff Ron Klain did seem to endorse one survey though: He retweeted an online YouGov Poll that showed 63% of Americans in support of a travel mask mandate.

But that YouGov poll was conducted on April 18, the same day a federal judge in Florida ruled that health officials had exceeded their authority when they mandated that every man, woman, and child over 2 years old wear a mask when traveling across state lines on an airplane. And polls that have been bandied about in subsequent arguments all predated that decision. The two most prominent come from the Associated Press and Morning Consult.

The AP-NORC Center for Public Affairs Research released a survey showing that 56% of Americans favor requiring people on planes, trains, and public transportation to wear masks. Meanwhile it found that 24% opposed the mandates and 20% were ambivalent. The AP poll was conducted from last Thursday up until the Monday decision, meaning that it didn’t capture public opinion after the mandate was nixed.

A Morning Consult/Politico survey similarly reported that most voters were on board with keeping the mandate for travel in place through early May: 59% supported it while 33% opposed it and 8% had no opinion. It was, however, conducted the weekend before the decision was dropped.

Journalists have noted those two polls in their reports, dutifully pointing out when the surveys took place. But those headlines were quickly overshadowed by viral videos of overjoyed travelers and flight attendants ditching their masks. The pre-decision polling that Psaki was referring to in the briefing room has been eclipsed and there is no going back, says prominent Republican pollster Frank Luntz.

“There is still a strong commitment to safety among a meaningful, measurable percentage of the country,” Luntz told RCP. “That said, the moment that the masks come off, everything changes.” Stuff the mask in a pocket, and suddenly “you start to think of what you hated about it, rather than why you’re wearing it. You think about the negatives of it, rather than the rationale for it.”

The Biden administration still encourages passengers to mask up when they travel, and U.S. Surgeon General Vivek Murthy posted a lengthy thread Thursday detailing why he still wears one. “Bottom line: wearing a mask while traveling is a small step that can go a long way to protecting ourselves and others,” Murthy concluded. Notably though, the doctor described masking as “a choice.”

So did Joe Biden. On the tarmac in New Hampshire on Tuesday, the president told reporters that, for passengers, the decision to wear or not wear a mask “is up to them.”

His Justice Department, meanwhile, announced that same day that it would appeal the decision, but only at the request of the Centers for Disease Control.

“It is CDC’s continuing assessment that at this time an order requiring masking in the indoor transportation corridor remains necessary for the public health,” the CDC said in a statement Wednesday. “CDC believes this is a lawful order, well within CDC’s legal authority to protect public health.”

While that plays out in the courts, public opinion is likely shifting. “I have no doubt that the mood today would be different than 72 hours ago,” Luntz said, previewing what he expects future polling will reveal. This is welcome news to the airlines. Many of the major carriers including American, Delta, and Southwest Airlines were pleading with the administration to rescind the mandate given the advances in vaccination rates as well as the many treatments and therapies now available.

Luntz suggested that those airlines designate certain high-frequency flights, for instance flights from New York to Washington, D.C., as mask only. There is a demand for that kind of service, Luntz said, albeit from “a minority in the population.”

A number of Democrats, especially those facing tough elections, were done with masking. This included Florida’s Democratic Agricultural Commissioner Nikki Fried who is challenging Republican Gov. Ron DeSantis. She celebrated the end of the mask mandate with a selfie shared on Twitter Tuesday. Then, Fried spent the next couple of hours fending off criticism from the left.

The first tweet was exuberant: “Peace out to the TSA mask mandate, but also peace and respect to others, whether wearing a mask or not.” The second, defensive: “I’ll read all your takes, but the mandates are dropped, vaccines are working, things are getting back to normal, and it’s okay for a Democrat to say it – because we made it possible. I love y’all.”

White House aides say that they will continue to make decisions about the lingering pandemic based on public health data, not polls. Even so, the polls that Psaki and others are reading are a snapshot of a moment in time that has passed and the midterm elections are fast approaching.

“If the DOJ is successful, it will absolutely destroy Democrats in the fall, even if there are solid health reasons,” Luntz said. “If you go back now, it won’t be the Justice Department or the CDC that’s punished. It will be Biden and Democrats. They ought to leave well enough alone at this point.”

The opinions expressed by contributors and/or content partners are their own and do not necessarily reflect the views of The Political Insider.

Refugees in all but name, Ukrainians in WA want to work but can’t

Federal Reserve chair says that a recession is possible

What do climate provisions in the U.S. Senate bill mean for Washington state?

What does the book ‘You Just Need to Lose Weight’ get right? Everything

What they found FBI seized 11 sets of classified documents

Democrats’ New Proposal Does Nothing to Lower Inflation

Trafalgar Group chief strategist: Most other pollsters are ‘usually wrong’